Wildernesses are home; closely followed by rural landscapes. When I came across an opportunity to work in rural environment, in the form of the Youth Citizen Service 2015 Leadership Programme, I didn’t hesitate before applying – here was a chance to employ my skills and gain valuable field experience in the sustainable development sector.

The selection process for the 12 volunteers was quick – based on an online application, a telephonic and personal interview, within a span of two weeks – I came to know that I had been chosen for the programme.

The editors of the magazine that I work for in Mumbai supported my endeavour and before I knew it, I found myself in a train bound to Jhansi in Uttar Pradesh on August 4, 2015. Derailment of two trains in Madhya Pradesh and the subsequent diversion of my train delayed my arrival for the three-day volunteer orientation programme at TARAgram, Orchha, by a day. Despite my late arrival, my fellow volunteers, employees of Development Alternatives and Voluntary Service Overseas ensured that I fit right in. On the third day, we were divided into groups of three and assigned our projects.

I left for Birguan village in Jhansi district the following day with my equally excited teammates – Bhavika Sharma, a PhD student of Forest Ecology and Environment from Solan, Himachal Pradesh, and Narendra Jain, Auditor, Sagar, Madhya Pradesh. Our team was assigned to work on a project centered on strengthening livestock-based livelihood activities amongst rural women in Jhansi, through a farmer-producer organisation (FPO).

For the first-week, we assigned ourselves the task to conduct a baseline survey to cover 20 women in Birguan, who are part of self-help groups and later, will positively become members of the FPO with 100 women members across five villages – Parlar, Bawal, Kot-Behta, Badgad and Birguan. We also met the village sarpanch (village head) and Veterinary Officer of Bhartiya Agro Industries Foundation (BAIF) to further our understanding of the village dairy industry. The second week took us to sweet shops (and dairies) for a market perspective of Jhansi, where milk, from various villages is sold.  Another key highlight was a capacity-building workshop held for potential FPO members, which was graced by Dr. B. P. Khushwah of Indian Grassland and Fodder Research Institute, Ajay Soni of National Bank for Agriculture and Rural Development and Dr S. N. Pandey of Development Alternatives among others. 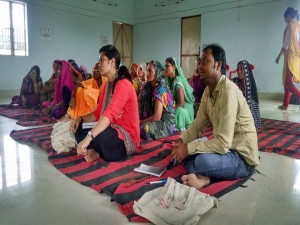 We traversed on foot, hitched rides on tractors, stopped at lakes and also joined roadside conversations of villagers in our third week, as we tried to understand the difficulties faced by milk producers and middlemen, who transport milk from these five villages to Jhansi. We had, by now begun collating and analysing the information that we had collected so far through surveys, visits to markets and villages to strategise solutions and methodologies for the successful functioning of the FPO. Along with our other fellow volunteers, we also participated in a clean-up drive during Global Citizen Day (GCD) meet on September 3, 2015; which was followed by an excursion to the nearby Garhmau Lake. 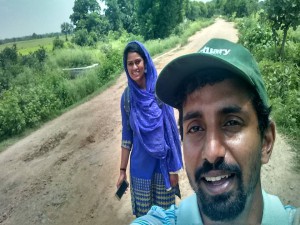 Visiting villages to interact with milk producers and middlemen by hitching rides on tractors and on foot was one the highlights of my YCS experience.
Photo: Anirudh Nair

Our weekends here have been very interesting with a host of events such as GCDs, sessions on communication and livelihoods with Sachal Aneja and Tanmoy Chatterjee from Development Alternatives, and interaction with our fellow volunteers. We faced many challenges as well in the course of our daily lives and work; as we tried to function as a team, but the simple joys of living in a village and the rapport we shared, along with timely interventions from Development Alternatives helped us overcome each hurdle. 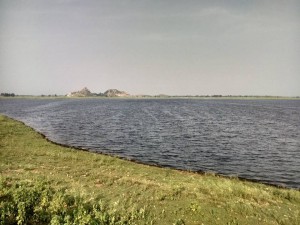 The Garhmau Lake where we will host our fellow volunteers for the Global Citizenship Day meet.
Photo: Anirudh Nair

As my return to Bombay looms, I can only wish that we had more time to spend in Birguan, in what has been a deeply fulfilling journey so far.