I embarked on a journey of self-discovery, when I got selected for the Youth Citizen Service (YCS) Challenge 2015, organised by Development Alternatives and VSO India.  This journey began when I first got selected for the interview round in Delhi and I moved further in this expedition, as 11 more volunteers, along with me got selected Youth Citizen Service 2015. I was lucky that I got to travel with three more members to Jhansi on 4th August. We reached on 5th morning and stayed at TARAgram Orchha for our Pre-Departure Training (PDT).

The PDT included important information and engaging sessions including such presentations, interactions, group games and we also visited a village named Mador, near Orchha in Madhya Pradesh. The visit to Mador village was an eye opener for me; the village lacks even the most basic facilities such as drinking water, sanitation and education. But it made me realise that people here are more content and satisfied despite their conditions. We, on the contrary, have every facility within our reach and yet we are never satisfied and keep thinking of a more luxurious life style. On the last day of PDT, we also visited Orchcha Fort of the Bundeli Empire. Through this visit, we got an opportunity to see Bundeli arts and cultural heritage of the Bundeli Empire.

For the programme, we were divided into four teams of three members each and were deployed in different villages of Madhya Pradesh and Uttar Pradesh. My team was assigned to work in Punawali village of Jhansi district for a store named SARAS. This store is run by a self-help group (SHG) called Sahyogini Mahila Mandal in Jhansi City. All products sold at the SARAS store are made by the members of the SHG and our main objective was to enhance the marketability of SARAS products.

My team had to work from Punawali village.  On the first day, we went to SARAS Store for understanding its operations, management and customer perception. We also met with members of the SHG groups to understand their problems, as well as the federation of SHG groups. During these meetings, I got the opportunity to interact with women possessing different skills, one such person was a girl named Chhaya in Nayakheda village. I was really surprised to see the hand crafted products made by her, especially considering that she never had any proper training; the products seemed to be so skillfully made.

Apart from our project, all the four teams of YCS had to organise an event on different issues at their respective host villages. Our team organised an awareness event on sanitation and health in Punawali. During this awareness event; we conducted activities such as tree plantation, art competition and survey on sanitation issues amongst households to know their mindset for using toilets. During the survey we found that people do not have access to toilet facility in their houses, largely because they don’t understand the need of having one in their households. 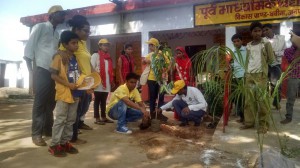 We were also a part of water supply inauguration programme held at Punawali on the occasion of Independence Day, 15th august 2015. I also got an opportunity to direct a play on the theme of conserving water, during the inauguration day of that programme, which was organised by Development Alternatives and Women Federation group, Sahiyogni Mahila Mandal. It was a wonderful experience to be a part of this programme.

All moments spent during the YCS journey have been fantastic. However, I could not relate to the discrimination that goes on in the villages of this area on the basis of caste and gender. Women still wear the veil (Parda) in this male dominant society of Punawali, and do not have the same freedom in comparison to their male counterparts. I met so many girls, who were forced to leave their studies in between because of there being no high school in their village. The situation is better for girls with good financial conditions, as they can still afford to go outside the village and study. Living in the village with unknown people has been the best experience for me. I met new people and new children like Jimmy, Happy, Sanu, Janu and other children.

During the programme, my team members and I worked on market analysis, decoration for store, training on hygiene and quality, and for shopkeepers. This journey taught me about team work, as to how different members bring in different dynamisms to a team. In the end, I would like to say that this journey has helped me understand myself better and also helped me to evolve as an individual and a professional.