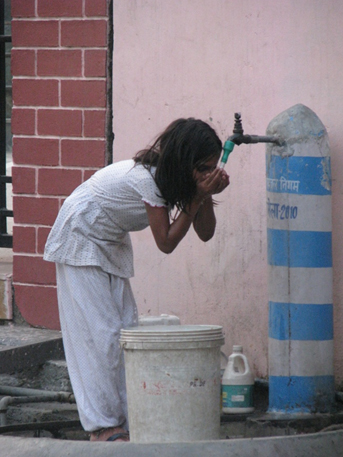 children than AIDS, Malaria and measles combined! In India It is estimated that around 37.7 million Indians are affected by waterborne diseases annually.

According to the National Family Health Survey, in India, out of the approximate 6.3 lakh rural schools, only 44% have water supply facilities. Majority of the schools in India also lack basic sanitation facilities. The latest ASER (Annual Status of Education Report) 2009 revealed that only 50% of government schools have toilets and four out of ten government schools did not have separate toilets for girls. Even where there were separate toilets for girls, only 30% were “usable”. Due to repeated episodes of illnesses, there is a considerable increase in the rate of students dropping out of school.

WASH (Water Sanitation and Hygiene) projects are being implemented in Uttar Pradesh (four districts) Chennai and Haryana (one district) where the situation of water and sanitation infrastructure is quite vulnerable. The capacity of the schools and students is built to impart the necessary information and skills, required for the proper usage and maintenance of the physical infrastructure, are provided. As part of the campaign, special activities are planned to bring about a behavioural change and make good water, sanitation and hygiene practices a part of the children’s psyche.

In some projects few students and teachers are selected and “Eco-Committees” are formed. The committees are made responsible to maintain these structures and create awareness about the need and importance of WASH to the upcoming batches.

The children then also act as change makers and reach out to their local communities to further spread awareness.